Got Featured in Dainik Bhaskar 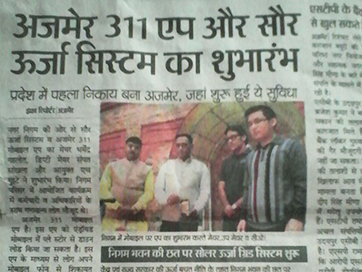 We have added one more feather in our cap by launching Ajmer-311 application in the city. The launch of the application was covered by Dainik Bhaskar of December 4, 2015 edition. We felt honored to launch our app in the city of Ajmer as our launched app will allow citizens to be more responsible towards their community and make it a better place. At the time of launching this application in the city, Mayor of the city, Deputy Mayor and Municipal Commissioner of the city were also present and shared their views on the application. They said that the application will work excellently for the city, allowing citizens to report non-emergency issues or concerns. They also added that Ajmer-311 will streamline the whole process of work.