Indore 311: The most accessed app in India for cleanliness drive 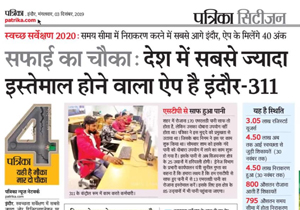 People’s role is inevitable in achieving “swachh survekshan” across the country and apps play a very crucial role in it. This is where Indore 311 app has proved its capability and in last four years, 4.50 lakh people have downloaded and used it. The app is generally used to register a complaint against the local and community issues which is responded back by the municipality or any authority body. Around 3.05 lakh users are already registered on the app and the count keeps on increasing with every passing day. The authority is supposed to resolve the issue within the set time. In order to ensure timely work deliverance, they have even setup a control room with 40+ staff that can be reached through the app. The app has helped the Indore municipality in resolving public’s issues to 95 per cent.