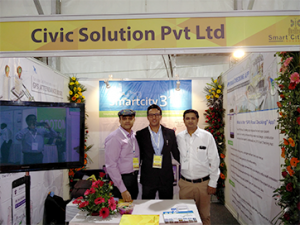 Our Booth at the Launch Event for Indore Smart City Project

We are pleased to share that Civic Solutions Pvt. Ltd. had its booth at the Launch Event for Indore Smart City Project that held on 12th February 2016. Indore Municipal Corporation in association with CII had organized the event at Grand Hall, Brilliant Convention Center. The city of Indore cordially invited our company to showcase our solution SmartCity-311. The event inaugurated in the presence of Honorable Speaker Loksabha Smt. Sumitra Mahajan, Hon Urban Development Minister, Govt. of India Shri Venkaiah Naidu and Hon Chief Minister, MP Shri Shivraj Singh Chouhan and Honorable Mayor Indore, Smt. Malini Laxman Singh Gaud. At the event, our company got a huge and positive response from the visitors. 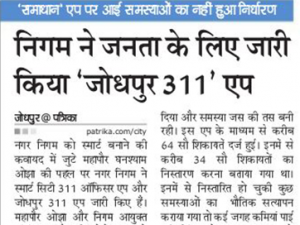 We Got Featured on Jodhpur Patrika

We are feeling privileged to share this news that we have launched the Jodhpur-311 application on 21st January 2015 and our developed application covered by a leading newspaper of Jodhpur. We got featured on Jodhpur Patrika of 22nd January 2015 edition. Now, the application enables citizens of the city and Nagar Nigam officers to make the city of Jodhpur smarter. Citizens can report non-emergency issues to Nagar Nigam officers while officers can submit real-time inspection reports, mark their attendance online and track projects of the city. 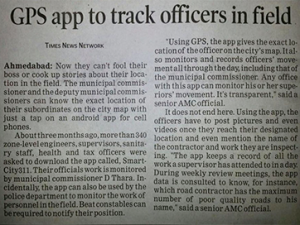 Got Featured in The Times of India, Ahmedabad

We got featured on The Times of India of 4th May 2015 Edition. It was really honored for our company to get featured in the leading newspaper of India for launching our application in the City of Ahmedabad. While launching this application more than 340-zone-level engineers, supervisors, sanitary staff, health and tax officers were asked to download the app. It enables the senior officers of the AMC department to monitor the work of their staff members. Further, field reporters need to post pictures even videos of the location, date of inspection, time and more. 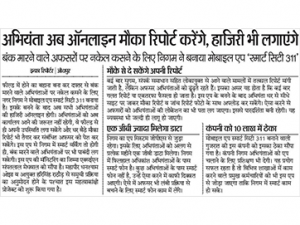 Got Featured in Dainik Bhasker

We feel extremely honored to share this news that our company’s developed application covered by a leading newspaper of Rajasthan. We got featured on Dainik Bhasker of 8th January 2015 edition for launching our application Jodhpur-311. The application will allow government engineers and officers to send real-time inspection reports with date, a photo of the field and GPS location. Officers can also mark their attendance online, allowing management to track down the attendance of their staff members. Moreover, it streamlines the workflow of the government department and makes it easy to report and mark attendance! 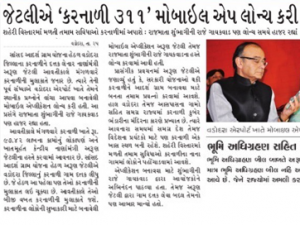 We had also launched our application Karnali-311 on May 24, 2015, that covered by Sandesh Newspaper, Vadodara Edition of 26th May 2015. In the presence of Mr. Arun Jaitley, a member of Bharatiya Janata Party and the current Union Finance Minister of India and Shubhangini Raje Gaekwad, the Rajmata of Baroda, the application had been launched for the officers to streamline the work of reporting. The app encourages residents of Karnali, Pipaliya, Vadiya and Baglipura villages to communicate directly with their community leaders in government to resolve issues of their villages! 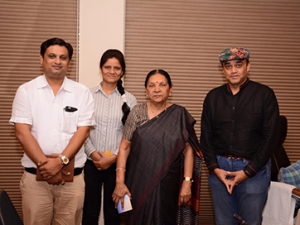 It was honored for our company to meet Smt. Anandiben Patel, the Chief Minister of Gujarat, regarding the launch of www.yogaahmedabad.com, a website that developed from our team, for the occasion of International Day of Yoga that is celebrated annually on June 21. On 10th June 2015, she launched the website http://yogaahmedabad.com. Our entire team worked extremely hard to get this project executed in a short span of time and our team did it by making this website exceptional. Cheers to our entire team, who worked on this project! 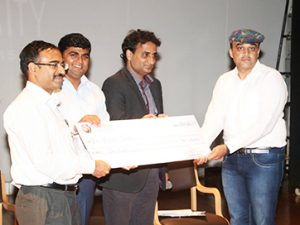 We are feeling extremely honored to share that our Smartcity-311 solution has also won the Global Entrepreneurship Week’s sandbox challenge, Hubli that took place from November 16 to November 22nd, 2015 in association with Microsoft Ventures, TiE Hubli and Ycenter. At the challenge, our company impressed the judges and investors by presenting our application SmartCity-311 and won Rs. 1,00,000 cash prize! 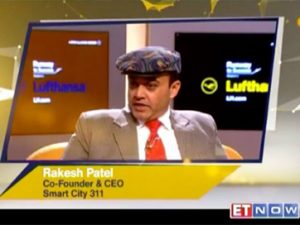 Mr. Rakesh Patel, CEO of the Space-O Technologies & Civic Solutions Pvt. Ltd. got starred in the most popular T.V show, Runway to Success (Season 3). The show was aired on 4th July 2015 on ET Now at 6:30 PM. Runway to Success is an extraordinary reality programme, which is known for celebrating the spirit of Indian entrepreneurship and showcases Lufthansa’s commitment to partnering the success of Indian business. There was a competition between Mr. Rakesh Patel, Mr. Vaibhav Dayal, founder, and CEO of Prim Resorts and Mr. Rohit Khetrapal, Co-founder of Find My Stay. The business icon of the episode was Capgemini India CEO Aruna Jayanthi. It was an extremely big landmark in our company’s runway to success. 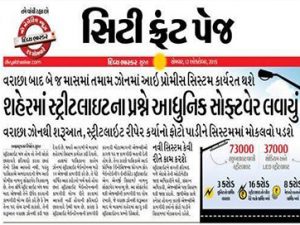 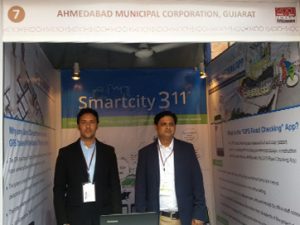 Our Booth at 41st Skoch Summit

We also had our booth at 41st Skoch Summit – Transformative Governance event for two days (22nd and 23rd September 2015) to represent our application SmartCity-311 among visitors. The Summit is attended by huge national and international media as well as television channels. There were 68 participants in the Skoch Exhibition on Smart Governance Practices and the event was sponsored by Yes Bank, Microsoft, MasterCard, HP, AMD, BSE, ABM Knowledgeware Ltd., And Suvidhaa. Our company got a positive response from the visitors while representing our solution SmartCity-311.